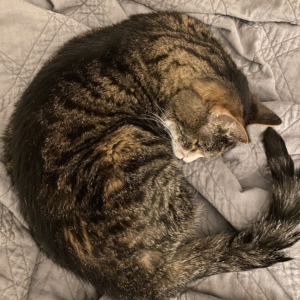 It was another person who was currently caregiving for a cat with cancer that had suggested this. And that’s why I find myself on the floor next to my cat and his food for… Well, I forget the number of times I’ve done this today. That’s not a good sign, and it’s an even worse sign that my cat has not eaten much of anything a couple days after his chemotherapy.

A month ago, it was just his eye. He just looked like he had pinkeye, so we went to the vet to get antibiotics. The vet armed us up with a few other things as well. As the week progressed, it became clear that something else was wrong. I went from a happy, independent cat to having a cat that was dependent on me to take him out from his hiding place to eat and drink water. How did that all happen in just one week?

His attention keeps drifting over to his water fountain. It occurs to me that maybe I should turn it off, but that might upset him even more. Instead I gently move his head and bring his focus back to the pile of food. 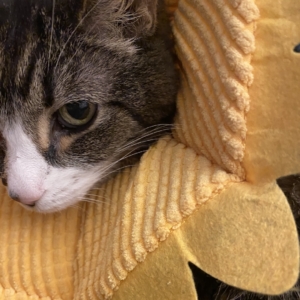 When his eye was an angry red and several different medications had made no difference, I rushed him to the emergency veterinarian. I dropped him off at 11:30 am. By 4 pm, I was being driven home with him in my arms as I numbly tried to reconcile the words “lymphoma” and “stage five” with the cat that had been a little terror just a week ago.

He is sniffing at the food, but at that moment, our neighbor’s dog starts barking and his attention goes to the back window. I briefly consider if it’s possible to ask our neighbor to figure out a way to make sure the dog never barks since it’s disturbing my very sick cat. But then I brush it off knowing that once again I’d be asking too much of someone. And then I’m wondering if I’m asking too much of my cat right now.

The oncologist gave me a kernel of hope. She said she was willing to try chemotherapy with him, and there was something that told me that this was unusual. I spent the time between our phone call and his first chemotherapy appointment wondering if she was just doing this to appease the person that couldn’t stop crying over the phone. Maybe the right decision was just to let him go.

He looks up at me with his big sad eyes. They’re almost asking me, “Why are you doing this?”

The first oncology appointment was nerve wracking. But there was just a glimmer of something happening as I let him out of his carrier when he got home. And that glimmer just kept growing until it was one big shining light. Over the course of the week, he went from a dependent cat with an angry red eye to an independent cat with a nearly perfect eye. Funny how it took just a week once again.

After giving me that sad look that just broke my heart, he finally resigns himself to what needs to happen. He takes the first bite gingerly.

One bite follows another and I get up to leave him to eat his fill. He doesn’t need me now, and I am able to let out a sigh of relief. He is once again going to be alright. And when I check his food dish later to see most of his food gone, I feel like he is more than alright. 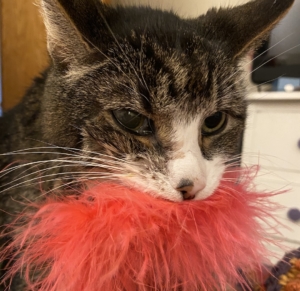 I hadn’t realized how much time all of this had taken from me until I didn’t have to do it anymore. I went from needing to be there for round the clock care to not needed at all, and as we go through our journey with chemo, I find myself yanked around as some days he needs me a lot and others he’s completely himself again. It just depends on which kind of chemo he received that week.

If you had told me at the beginning that the days he doesn’t need me tend to be the hardest, I wouldn’t have believed you. But it’s true. Those days that are full of coaxing him to eat find me with not a single moment to spare, so I’m constantly just in the present trying to be what he needs. On the days where he’s just fine, I’m left with time to fill. Yes, work easily fills those hours, but I’m not as present as I normally am. My brain has more time to wander…

And those are the times where I think, “What will I do when caregiving ends?” Will this emptiness I feel when he doesn’t need me just overtake me completely? Will my life start feeling like hours to fill? What will happen to me when I don’t have those big eyes pleading with me to get his way?

As those questions plague me, I scoop him up in my arms. He wiggles to get free, but I hold him a little tighter and kiss him on the head anyways. We’re not there yet, so for now, I’ll just cherish every moment regardless of whether he needs me. And he’ll just have to put up with all the hugs that will entail.

Want to join the discussion?
Feel free to contribute!

Best 9 Hospice and End of Life Articles of 2019