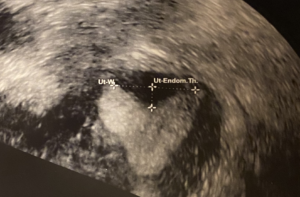 I popped a couple of Ibuprofen knowing the pain won’t even be touched. I’m thinking of getting out the heating pad in hopes that it does something. But it won’t change things: I’m stuck in bed yet again. I muttered some lies to anybody that I was supposed to see to make them more comfortable while I’m suffering with no relief.

It didn’t always used to be like this. My period used to come like clockwork. Yes, sometimes I would have a painful period, but it wasn’t almost every month. I miss that reliable period so much now.

Six years of this. SIX. YEARS. Those years have been filled with muttered apologies, but never with the real reason why I’m missing from my own life. I sometimes wonder if a friend or work colleague will look at a calendar and put two and two together. But it never happens.

I often think back to the first time I had one of these periods.

May 2015. We’d been trying for a baby for three months and something finally happened. I know it’s ridiculous to say “finally” but just remember you’re dealing with a Type-A personality here. I was sure I would get pregnant in the first month. Shocked when nothing happened in month two. And now here we were. My always on-time period was finally late.

Pregnancy test after pregnancy test came back negative. But I wasn’t to be deterred. Friends had mentioned that it could take time to build up enough hormones for a pregnancy test to be positive. And the fact remained that something was different. I was pregnant, and I just needed one of these pregnancy tests to agree.

For two weeks, I’d buy two boxes of tests at a time and go back to the store for more when I made it through each of those tests. All negative.

And then, finally, an answer. It came in the form of unimaginable pain coupled with a heavy flow. There was also the crying, oh so much crying. Whether it was right or wrong, hope had been ripped from me.

As I lay in bed now, I don’t even know what that hope feels like. It’s been gone for entirely too long and has been replaced by this pain that visits every month.

I talked to a friend while I was in the depths of realizing I wasn’t pregnant. She asked lots of questions to figure out what my body was doing and then blurted out, “This sounds like a miscarriage.” I laughed it off and pointed out all the negative pregnancy tests. “Your hormones may not have built up enough to even register. That could even be why you miscarried.”

To this day, I refuse to call it a miscarriage. That would put me solidly in the midst of a community that knows what happened to their body. I don’t. I never will.

I called an OB/GYN right away and booked the first appointment I could. It was a month and a half away, and they couldn’t be persuaded to fit me in sooner. So my maybe-miscarriage will always be referred to as “the event,” simply because I wasn’t able to see a doctor. It’s as close to the truth of what happened as I can get.

As if that wasn’t frustrating enough, pain started to follow me everywhere I went a couple weeks before the appointment with the doctor. I had to stop most activities and go further into myself at a time when I really could have benefited from being around others.

But there was still a drop of hope there. I was seeing a doctor, so the pain would go away soon. And even better: If I had been maybe-pregnant, I could actually get pregnant.

The doctor did the exam and declared everything normal. “No, it’s not,” I yelped. She looked at me like I wasn’t supposed to be questioning her. “I’m in pain every day. That’s not normal.”

The number of doctors I’ve seen since then is way more than a normal person should have seen. And I even added in an acupuncturist (the only person that could get me out of pain). Out of all those doctors, only one didn’t tell me I was getting old for kids (at the ripe old age of 34). And that same doctor was the only one that looked at me like a person and not a failed babymaker.

But even after finding my doctor, the painful periods added up. Each month whispering to me, “You’re not pregnant,” and then yelling, “And you’ll have to sit here and think about that.” Having to be alone while I pondered what my body was and wasn’t doing had to be the cruelest part of not getting pregnant. The word “failure” was just constantly on repeat.

My doctor decided to do a hysterosalpingogram (HSG) on me at the last minute. I didn’t know the right questions to ask or even what was going on. My doctor just kept telling me that it was another check on the list and that it would come back normal, so don’t worry about it.

After he was done with the procedure, the doctor said quietly, “I’ll talk to her back in her room,” to one of the nurses. I thought, “Oh that’s nice. He’s giving me a minute to recover from the pain of the procedure.” I was naive.

Pictures of what a normal uterus looks like were shoved in my hand and then a picture of my very not-normal uterus was given to me. I had a septate uterus and I was trying to wrap my mind around what that meant. I could only really hear, “Your uterus is in the shape of a heart.”

“Is this why I have the worst periods?” I couldn’t hide the hope in my voice.

My doctor gave me a weird look, and I realized I’d never even bothered to tell him about that. Too many doctors hadn’t cared. “Yes, it definitely could be,” he said carefully.

More appointments were made to make the game plan, and then after deciding not to get surgery to make my uterus less heart-like, I felt done.

And I still feel done. The yearning for a baby will never go away. It’s a hole in that heart-shaped uterus that bleeds every month to remind me just how big it is. There is always the chance I could end up pregnant, but for my health and sanity, I just live in this body as it is with no expectations for it to do what others can seemingly do so easily.

Do you have a story to share? Submit it here.

Want to join the discussion?
Feel free to contribute!

What Will I Do When Caregiving Ends?